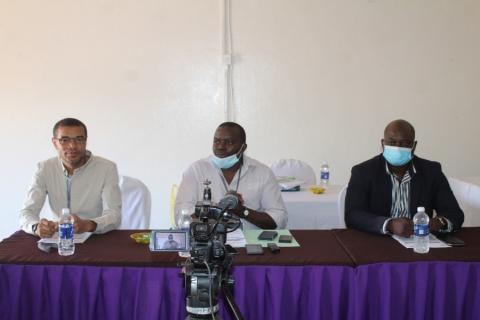 The Dean School of Veterinary Medicine has implored health workers to join hands with the Veterinary practitioners in fighting the neglected tropical diseases such as cysticercosis taeniasis among communities in Zambia.

Speaking during the Health Worker training workshop on Taema Soilum infection in Chipata, eastern province, organized by Solium Diagnostics (SOLID) a project under the School of Veterinary Medicine, Prof King Nalubamba said cysticercosis/taeniasis was a neglected tropical disease and that there was a need to start addressing it in terms of the risk it poses to individuals and the community at large.

Prof Nalubamba said that cysticercosis disease was on the increase particularly in the Eastern province and parts of Southern province because of the high population of pigs and pork consumption. He said to address such problems the School of Veterinary Medicine through projects such as SOLID has come up with end-user driven research programmes aimed at addressing community needs.

“The School of Veterinary Medicine has been a leader in terms of One Health Zoonosis multi-disciplinary research. The School has been championing collaborated research with various stakeholders such as the Ministry of Health, Wildlife Department under One health, therefore, the school looks at a lot of diseases and SOLID is one of the two projects which is looking at cysticercosis/taeniasis as a neglected tropical disease. This is a neglected disease because we don’t talk about it despite it being a serious problem among the people in the communities,” he said.

Prof Nalubamba further urged the participants to use their phones to educate the community about neurocysticercosis and the preventive measures which could be used to avoid contracting the disease.

He said the SOLID project had been addressing the challenges of cysticercosis dissecting the extent of the problem in Eastern province, and that the call to work with health workers in the Ministry of Health was a deliberate move to ensure that there was a multifaceted effort in fighting the disease. Prof Nalubamba urged the health workers to take interest in the programme so that they could understand the impact of the disease on the community as well as how epilepsy comes about as a result of neurocysticercosis.

Meanwhile, Ministry of Health Eastern Province Health Director Dr  Gideon Zulu reiterated the need to tackle the common disease which was also a neglected tropical disease such as neurocysticercosis commonly known as epilepsy.

Dr Zulu said to address this problem the SOILD Project team, after extensive studies in the communities, thought it wise to go into the districts and provinces to conduct orientation meeting to make health workers aware of the prevalence of epilepsy and the danger it poses to the community. Dr Zulu revealed that according to the study which was conducted by the SOLID project in Eastern province, Katete area to find out why there was a high prevalence of people with epilepsy, it was discovered that over 50 per cent of the people they followed who had epilepsy, it was associated with neurocysticercosis.

“So this is how big the problem is in Katete. By the way, people who have epilepsy, suffer seizures and some of them have been stigmatized. Some of them can’t go to school, some of them can’t get married. So we must understand what this organism is and what it can do and how we as health workers can find a way of thinking about it as one of our differential diagnosis.

“If somebody comes and gives us a complaint about the headache, blurred vision or fitting do we think of neurocysticercosis? This is why we are here today so that we create some awareness during this one-day meeting with you our health workers,” he said.

Dr Zulu said SOLID Project had already conducted similar awareness programmes in Katete and the plan was to roll out the orientation awareness to other towns such as Chipata, which also include Kasenengwa and Chipangali. “The SOLID project intends to cast the net wide so that together, that is, health workers and Veterinary practitioners we may start to contribute towards the fight against this neglected tropical diseases such as neurocysticercosis and cysticercosis taeniasis,” he said.

And Local Project Co-ordinator CYSTISOP and SOLID Projects Dr Kabemba Mwape revealed that according to the 2017/2018 Livestock and Acquireculture Census Report the pig population has been increasing in Zambia with Eastern province accounting for 28.3% and Southern Province at 16.8%. He said as at January 2018 the total population for the pigs stood at 1,082,765 of which 90 per cent of the pigs kept by small scale farmers were on free-range which increased the risk of pork tapeworm infections.

Meanwhile, one of the epileptic patient Mr Whiteson Banda who also happens to be a beneficiary from the SOLID Project intervention thanked the team for the help they were rendering in the community. Mr Banda said the problem of epilepsy was prevalent among the villagers in Sinda due to free-ranging pigs, poor sanitation, lack of meat inspection and appealed to the SOLID project team to continue sensitizing the community as well as to intensify tests in the area to serve the lives of many people who may be sick.