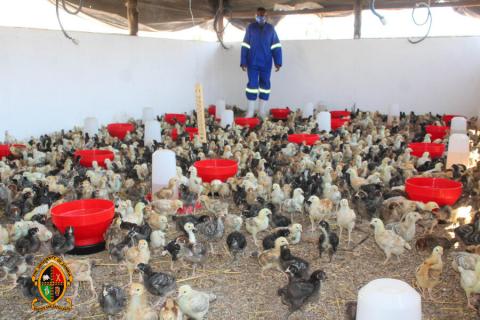 Ministry of Technology and Science Permanent Secretary Mrs Kayula Siame has implored the University of Zambia (UNZA) to take the lead in the of implementation of Science, Technology and Innovation (STI) in agriculture so as to improve the livelihood of farming communities in the country.

In a speech read on her behalf by the Director of Science and Technology, Mrs Jane Chinkusu, Mrs Siame said there was a need to demonstrate that farming was a business that could contribute to job creation in the agricultural sector through use of science, technology and innovation. She said this during the handover of the Village Chicken Park Project by Technoserve Limited to UNZA on Thursday, 7th October 2021 at the Agricultural Technology and Demonstration Centre (ATDC).

“As the Ministry of Technology and Science, we are most grateful to Technoserve Limited for facilitating this project that has resulted in construction of the Village Chicken Park and special gratitude goes to the Melinda and Bill Gates Foundation for funding the project. I, therefore, want to implore the University of Zambia who will be the front line custodian of the facility to put it to good use,” she said.

Mrs Siame urged UNZA to take advantage of the investment by focusing on empowerment of farming communities in Chongwe district where the facility is situated. And UNZA Vice-Chancellor, Prof Luke Mumba, revealed that the Village Chicken Park project was a result of discussions held between UNZA, Jilin Agricultural University and Melinda and Bill Gates Foundation on the need to transform ATDC into a unit that added value to society and to the two universities.

“In this respect, we saw that setting up of Phase III (the sustainability phase of ATDC) needed significant transformation to fit into future aspiration of both UNZA and Jilin Agricultural University,” he said. Prof Mumba said with the help of Technoserve Limited a three-year project named “The Technical Support for Agricultural Technology Demonstration Centre Project” was developed with Technoserve being given the facilitation role while UNZA and the ATDC in particular was the direct beneficiary and implementer.

He said the US$ 2.4 million (K40 million) Project was focused on developing capacity of the Centre to carry out its expected roles in Phase III and to channel some funds through the University system for the ATDC to procure most of the requirements related to capacity building. The Vice-Chancellor further said, with regards to the development of a value chain model, the project selected the village chicken enterprise on account of the obvious benefits that the birds bring to society.

He said that it was an exciting moment for UNZA to be part of the project as it demonstrated the University’s contribution to the development agenda of the country through STI and added that this was in line with the United Party For National Development Manifesto which recognises that STI is a catalyst or key driver for economic growth and development.

Prof Mumba appealed to the Government and the private sector to partner with UNZA in order to expand and propagate the Village Chicken Park project in different parts of the country for a greater impact on the lives of people.