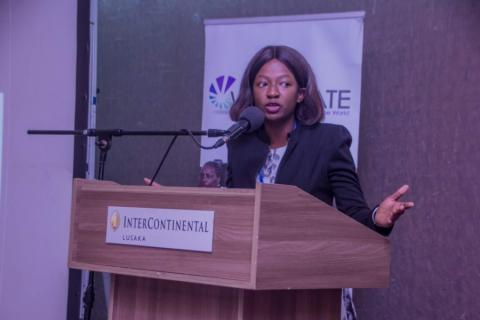 The University of Zambia fourth-year student pursuing a Bachelor's Degree in Pharmacy has developed a prototype of a body spray which can be used as well as prevent attacks on asthmatic and hypertensive patients.

20-year-old Florence Mulenga said the concept behind the project was based on the fact that most asthmatic patients were allergic to most perfumes and body spray, hence the need to develop a tailor-made body spray which would also act as medicinal to the patients. She said during her research she also discovered that the ingredients used to make the spray had properties which can help to lower blood pressure, hence, extending the study to hypertension.

Ms Mulenga said the prototype which has been developed so far was specifically for asthmatic patients, therefore, expertise would be required to help research more on how the spray can be useful on hypertensive patients.

“The ingredients being used in developing the spray were also found to be muscle dilator meaning the product can dilate the blood vessels, hence, lowering the blood pressure,” she said.

She revealed that a lot of people were already requesting for the product, however, she added that the product still needed a lot of research to make it safe for customer use before it can be put on the market.

During her research Ms Mulenga was supported by WECREATE I ZAMBIA, SOUTHERN AFRICAN NETWORK FOR BIOSCIENCES (SANBio), HIVOS and many other companies.

She has appealed to the research institutions, donors and well-wisher to come in and support the project in order to make the product a complete package that is safe and effective for public use.

Recently, Ms Mulenga participated in a national wide Biosciences competition called "FemBioBiz Acceleration Program" and her project emerged as the best-student start-up, which earned her sponsorship to represent Zambia in South Africa at the African Women Innovation and Empowerment Forum (AWIEF).