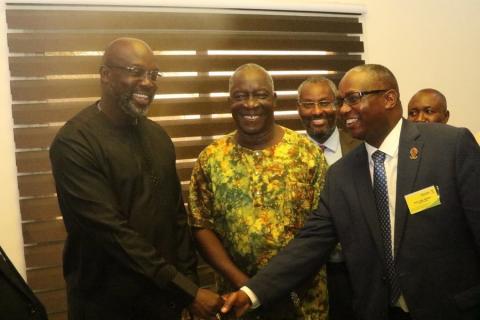 A delegation from the Regional Universities Forum for Capacity Building in Agriculture (RUFORUM) paid a courtesy call on His Excellency George Manneh Weah the President of the Republic of Liberia at his Capitol Hill residence in Monrovia on 25th April 2019. This meeting came ahead of the preparations for a symposium on higher education in Liberia scheduled to take place on 26th April 2019 Organised in partnership with the University of Liberia with focus on Promoting Higher Education in Liberia.

And President George M. Weah has applauded RUFORUM for being a Pan-African organisation that was working tirelessly to solve African challenges such as food and nutritional Security through investment in higher education, research and Innovation in Africa. He pledged his support to initiatives that support the education of youths in Liberia. President Weah acknowledged the value of formal education in transforming economies and said it was the reason he went back to study despite being a professional footballer with international accolade.

Since 2018, as part of aligning operations for delivery of the Vision 2030 to create a Pan African Network, RUFORUM strategically intensified on advocacy with African Governments to support its initiatives with the member universities in the 37 countries in Africa. The Liberia meeting is part of the move by RUFOURM to anchor the West African outreach. The delegation led by Prof. Adipala Ekwamu, the Executive Secretary and comprising among other Vice Chancellors Professor Luke Mumba from the University of Zambia, congratulated the President for his election as the Head of State of the Republic of Liberia and for particularly maintaining and strengthening good governance and institutional processes in Liberia while focusing on strengthening agriculture and promoting Science, Technology and Innovation for economic development in Liberia. He commended His Excellency President Weah for the Government’s effort to re-build Liberia human capital base and efforts to strengthen Higher Education in Liberia as a fulcrum for economic development of the country. Professor Adipala thanked the Ministry of Education and the President of University of Liberia for organizing a Liberia Higher Education Day to galvanise support and action for the development of the Higher Education Sector in Liberia. The RUFORUM delegation included Vice Chancellors from 10 Universities in Africa and RUFORUM Secretariat staff.

Liberia is one of the post-conflict countries in Africa that joined RUFORUM in 2017. The RUFORUM mission to Liberia and the higher education symposium comes at the backdrop of years of civil unrest that affected the higher education sector in the country. Liberia is in dire need of rebuilding its higher education sector and the broader education value chain. Understanding the depth of these needs as well as mobilizing key actors including the Government of Liberia and its private sector is an important undertaking that RUFORUM in partnership with the University of Liberia is committed to. Key areas of focus for the symposium include 1) Deliberation on advancing Africa’s response to higher education disparities and support to disadvantaged students; 2)Mobilize the private sector to take active role and investment in agricultural education and transformation efforts; 3)Take stock of higher education and agricultural priorities and development needs of Liberia as a post-conflict country; and 4) Foster linkages between Liberian Higher Education sector and the RUFORUM network of universities.