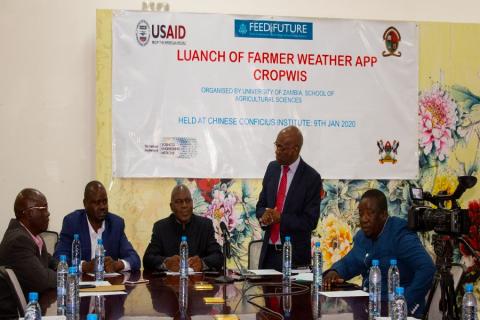 The University of Zambia (UNZA) School of Agricultural Sciences in collaboration with the College of Agriculture of Makerere University and the University of California has launched a weather phone app called CROPWIS which is capable of predicting weather forecast and real-time satellite meteorology to farmers.

Speaking at the launch, UNZA Vice-Chancellor Professor Luke Mumba, in a speech ready on his behalf by the Director Research and Graduate Studies (DRGS) Prof Henry Sichingabula said developing the app of this nature was an excellent innovation which will help farmers to make informed decisions on agriculture production in the face of climate change and weather variability.

“This app has come at an appropriate time when the rainfall pattern has become unpredictable, therefore, as researchers we need to help farmers with appropriate technology like the one we are launching today which they can use to gauge the weather before planting,” he said.

Prof Mumba said agriculture was an important factor in the development of the Zambian economy, therefore, he urged the staff in the School of Agriculture Science to increase the research effort in order to help the nation in agricultural development.

And speaking at the same event Principle Investigator Nowcast and Forecast Project Dr John Wasige from College of Agriculture of Makerere University in Uganda said that the app was a game-changer which will help to bridge the gap between the climate information and the farmer as well as to determine the amount of rainfall before planting.

Dr Wasige said the app was able to predict weather conditions for specific places as opposed to generalized results. “The app can only give accurate results for a particular area, therefore, you need to localize the search by selecting the area where you are through the use of the GPS,” he said.

Meanwhile, the University of Zambia Lecturer in the School of Agricultural Science and Co-Principle Investigator on the project Dr Langa Tembo said the app was over 90 per cent accurate in terms of the weather forecast. Dr Tembo appealed to the general public to access the app through PLAY STORE for those with ANDROID PHONES.

“To access the app you need to go to PLAY STORE  on your android phone search for CROPWIS the icon has two cobs of maize, install it, after installing on the top right corner of the app there are three dots click there to detect location then you will be able to see the weather pattern for that particular day, the following day, 5 days later or 16 days. Basically, this app can be used to plan for different types of events such as outdoor parties among others but on this project, we are more focused on helping farmers,” he said.

Dr Tembo said the project team would appreciate feedback from the general public on how the app is performing. “Feedback can be sent via email to langa.tembo@unza.zm or langatembo@yahoo.com,” he said.

And the Dean School of Agricultural Sciences Dr Benson Chishala has commended the two universities for coming up with the app which will be useful to farmers and further called on the media to help in disseminating the information so that more farmers can have access to the app.

Dr Chishala further thanked the USAID and the National Academy of Science (NAS) of the United States Government and other cooperating partners for sponsoring the project.